It is with a heavy heart that we report the loss of Champion Pascavale Enchanted.  We were hoping to celebrate Teddy's 14th Birthday today but unfortunately he left us just a few days early.  He lived a very full life and will be missed by those that loved him so dearly.

Special condolences go to his breeders Mark and Michael who bred and campaigned him to his British crown and Paula and Brenda who cared for him when he arrived in the US for some years. Over the last several years it has truly been a privilege to care for him and have him as a part of our family, sleeping on my youngest daughter's bed. In addition, he has directly and indirectly touched the lives of many people all over the world.

We would like to celebrate his life by reflecting on his accomplishments and remembering this remarkably influential and sweet-natured cavalier.

Teddy leaves behind a tremendous legacy.  His influence as a stud dog is profound and is realized not only in his direct progeny but by several generations of their progeny as well.  He has sired 8 British Champions, over 15 European Champions, 22 CKCSC USA Champions and 63 AKC Champions.

He sired offspring on four continents including a onetime top CC holder in the UK, the top cavalier in France for several years and the all time top winning Cavalier in the CKCSC, USA to date.  He was the top sire in the UK for three years 2004/05/06 including top toy stud dog in 2006.  He was the top sire in the CKCSC, USA for four consecutive years from 2008 through 2011.

Additionally, he is the overall top all time Sire to date in the CKCSC, USA and tied for the top Cavalier sire of all time in the AKC. He has earned a Register Of Merit in the CKCSC and AKC and a Legion Of  Merit in the AKC, having produced at least three progeny that have obtained their Register Of Merit. How proud Mark and Michael can be breeding such a remarkable legacy.

All of this considered, perhaps the best attribute that he passed along was his loving and sweet personality.  He never met a stranger, loving every person and cavalier that he encountered.

Pascavale Enchanted, you were a once in a lifetime dog; a true star among stars.  You will forever be cherished in our hearts and you will live forever through your future generations. 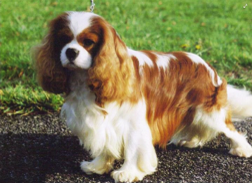